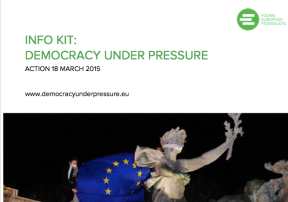 Download our postcards to print and fill out for this year’s action! 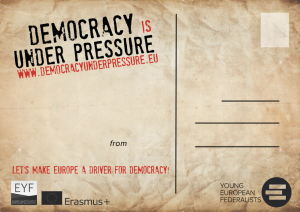 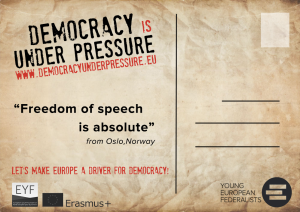 Democracy is under pressure not only in Belarus or Ukraine, but all over Europe. Democracy is being pressured from many different angles ranging from the Rise of PEGIDA in different part of Europe to the threat to the freedom of speech as manifested by the Charlie Hebdo massacre in Paris.

Freedom of speech, a free press, equality, rule of law, secularism of institutions and guarantees for minorities are examples of the values that are constantly being challenged and threatened – and again it is our responsibility to stand up for these values.

With our action we want collect messages from around Europe and give a voice to people who believe democracy is worth defending. We will organize street actions all around Europe and using blackboards we will ask people passing by to express their worries on democracy and we will post these messages on Facebook and here  on our web page.

Also this year there will be a prize for the most creative and impactful sections organising the action.

In the spirit of the Belarus Action, and to stand up for democratic values – we now see the need to address the democratic urgencies all over Europe by doing street actions such as:

You can “Speak Up For Democracy” in the following ways: